Don't spend hours aimlessly searching the internet. Here is our specially curated list of Christmas gifts for surveyors and housebuilders, both young and not so young. 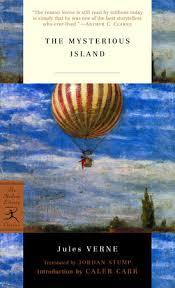 What the publishers say: “Based on the true story of Alexander Selkirk, who survived alone for almost five years on an uninhabited island off the coast of Chile, The Mysterious Island is considered by many to be Jules Verne’s masterpiece. “Wide-eyed mid-nineteenth-century humanistic optimism in a breezy, blissfully readable translation by Stump” (Kirkus Reviews), here is the enthralling tale of five men and a dog who land in a balloon on a faraway, fantastic island of bewildering goings-on and their struggle to survive as they uncover the island’s secret.”

Why we like it: If society collapses, this is the book we recommend you have in your back pocket. The engineer can create everything, including a pottery kiln to make bricks. A fascinating read - and inspiration for budding engineers.

Science and the City: The Mechanics Behind the Metropolis - Laura Winkless

What the publishers say: "Cities are a big deal. More people now live in them than don't, and with a growing world population, the urban jungle is only going to get busier in the coming decades. But how often do we stop to think about what makes our cities work? Cities are built using some of the most creative and revolutionary science and engineering ideas – from steel structures that scrape the sky to glass cables that help us communicate at the speed of light – but most of us are too busy to notice. Science and the City is your guidebook to that hidden world, helping you to uncover some of the remarkable technologies that keep the world's great metropolises moving."

What the company says: “The Fisher Space Pen was designed and created by Paul Fisher in 1968. The pen was designed by Paul as he found a need for a use of a pen in space as astronauts began to explore our universe. There was no pen that was able to write in the extreme conditions of space. Every Space Pen is guaranteed to perform in temperatures from -30 to 250 degrees F, underwater, in zero gravity at any angle-even upside down. Its reliability means it’s the only pen you’ll ever need.

Why we like it: It can write at all angles. Plus you can get outdoor and tactical pens with special neck chains. Ideal for engineers.

What the company says: “The Tech Tool Pen pen by RED5 is a mini toolbox in disguise, with multiple pocketable tools for all the budding DIY-ers out there. This versatile pen includes a ruler (measuring in inches and centimetres), spirit level and screwdriver with both flat-head and Philips attachments hidden in the end. The pen is finished in a matte metal casing giving it a cool look and quality feel.”

Why we like it: Its fun, handy and multi-purpose.

What the company says: Twist and turn the outer rim of these stylish cufflinks and watch as the central cogs smoothly rotate and turn. Each cog has been wire cut to ensure a perfectly smooth interlocking function. The back of the cufflinks are made from carbon fibre and the lack of cast components ensures there is no friction to spoil the movement.

What the company says: “With its unique moulded metal and resin construction, this is the most detailed Millennium Falcon model ever. Your 1:1 scale movie prop replica is 808mm long, 596mm wide, 192mm high and it weighs 24 pounds. It has pre-painted hull parts, with working electronics and removable panels to view the interior. It’s just like the prop from The Empire Strikes Back.”

Why we like it: This is fully functional with working lights. N.B this is not life-size. 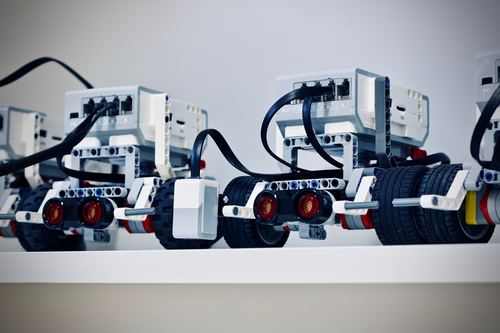 What the company says: “It comes with a number of project examples that you can easily replicate, and a powerful robotics platform that you can program to perform all sorts of tasks. So if you are a fan of robots, it is never too late for you with these “Top 10 Arduino Robot Kits for Adults” that even beginners and experts can learn the electronics, mechanics and software of it.”

Why we like it: the sky’s the limit with these range of robots. Starting with the most basic that you can control using your smartphone to a fully programmable machine where you will have to get to grips with some quite advanced robotics.

What the company says: “Click-Clack.” It’s the iconic sound of two Tegu Blocks coming together. Tegu has reinvented the wooden block in a way that brings new life to a favoured classic. By safely embedding magnets into each piece, Tegu Blocks become curiously attractive for both kids and kids at heart. Defy gravity and push your imagination in ways never before possible. No instruction manuals or electronics; just toys that demand imagination and inspire limitless creativity across all ages. Open-ended play is endangered, but we’re bringing it back. Created with beautiful Central-American hardwoods and safe water-based finishes, these blocks have proven wildly addictive for kids (and kids at heart) and will encourage the simple joy of creating for generations.”

Why we like it: These blocks are excellent to keep both kids and adults alike amused on car journeys and in restaurants.

What the company says: “Change the atmosphere of your home with the touch of a button. Dim them, turn them on or off, and switch their glow from warm to cool. Smart lighting at IKEA is an expandable system you can add on to as your lighting needs change. Our smart lighting range offers wireless LED bulbs, panels, and doors for furniture.”

Why we like it: You can instantly change the mood of a room, or have lights come on when you enter.

Elon Musk: How the Billionaire CEO of SpaceX and Tesla is Shaping our Future - Ashlee Vance

What the publishers say: “South African born Elon Musk is the renowned entrepreneur and innovator behind PayPal, SpaceX, Tesla, and SolarCity. Musk wants to save our planet; he wants to send citizens into space, to form a colony on Mars; he wants to make money while doing these things, and he wants us all to know about it. Elon Musk is the Steve Jobs of the present and the future, and for the past twelve months, he has been shadowed by tech reporter, Ashlee Vance.”

Why we like it: A fascinating read about a mercurial character.

What the company says: “mechanical 3D puzzle that is designed to fuel imagination, inspire exploration and mechanical skills, and encourage the natural curiosity that leads to a lifetime of learning! This construction kit is a fantastic gift for occasions like birthdays or holidays. You can turn into a friendly competition by letting others have a go at safe cracking, and awarding a prize to the one who is able to figure out the mechanism.”

What the publishers say: Embark on an adventure of personal creativity and invention with fan favourite Rosie Revere! This activity book features art from the picture book Rosie Revere, Engineer and will inspire young readers with activities of all kinds. Kids will have the chance to design a better bicycle, build a simple catapult, construct a solar oven, and more! This empowering activity book will teach problem-solving and creative-thinking skills crucial to STEM fields while also providing opportunities for its readers to try new things and, sometimes, to fail.

Why we like it: Its great for budding engineers, surveyors and housebuilders and has some beautiful illustrations. 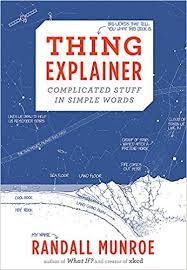 What the publishers say: “a series of brilliantly simple diagrams ('blueprints' if you want to be complicated about it) that show how important things work: from the nuclear bomb to the biro. It's good to know what the parts of a thing are called, but it's much more interesting to know what they do. Richard Feynman once said that if you can't explain something to a first-year student, you don't really get it. In Thing Explainer, Randall Munroe takes a quantum leap past this: he explains things using only drawings and a vocabulary of just our 1,000 (or the ten hundred) most common words. Many of the things we use every day - like our food-heating radio boxes ('microwaves'), our very tall roads ('bridges'), and our computer rooms ('datacentres') - are strange to us. In Thing Explainer, Munroe gives us the answers to these questions and many, many more. Funny, interesting, and always understandable, this book is for anyone -- age 5 to 105 -- who has ever wondered how things work, and why.”

Why we like it: Fascinating and funny. Our favourite bit is the microwave or “food-heating radio box.” Munroe describes its buttons as “time teller,” “controls you actually use” and “lots of other controls they always add, even though no one ever wants them.” So true!

What the company says: The Charge Plus TTi is ready for jobs big and small. This practical multi-tool combines some of our most requested features with premium materials and upgraded, replaceable wire cutters. Titanium handles make the tool lightweight and strong and an ultra-sharp S30V steel knife blade resists

Why we like it: It’s the ultimate get out of a fix tool. We are going to order ten of these.

What reviewers say: “AnyCubic I3 Mega is one of those devices that you end up discovering by sheer chance and then can’t stop revelling in the joy of your discovery. It is the third 3D printer to be released by the Chinese manufacturer AnyCubic and boasts of some impressive features such as a full metal frame, auto-levelling, filament detector, resumes print after an outage, and a touchscreen.”

Why we like it: make your own models, create personalised gifts, and generally have fun.